The course has been accredited by the European Accreditation Council for Continuing Medical Education (EACCME®) for a maximum of 19 European CME credits (ECMEC®s).

Professor at Faculty of Medicine, University of Oslo and Attending Pathologist, Department of Pathology, Norwegian Radium Hospital, Oslo University Hospital, Oslo, Norway. He is main interests are cytopathology and gynecological pathology. His research is focused on cancer diagnosis, metastasis, cell survival, and studies of prognosis and chemoresistance mainly in cancers involving the serosal cavities like ovarian carcinoma, breast carcinoma and malignant mesothelioma. He is an author of 280 peer-reviewed scientific publications and several book chapters, as well as the editor of a book on serous effusions. He is also a reviewer and a member of editorial boards for leading international peer-reviewed journals, as well as invited speaker on international and national meetings and conferences.

Is a professor at Department of Human Genetics, KU Leuven, Belgium. Her daily work is focused on diagnostic services (karyotyping and molecular cytogenetic/genetic tests) for the differential diagnosis and predictive selection of solid tumors for standard chemotherapy or targeted therapy with small molecule inhibitors. Her research is concentrated mainly on the development and transfer of the knowledge of molecular biology about sarcomas and brain tumors to the daily medical practice, aiming at improvement of diagnostic, prognostic and predictive tools, identification of new therapeutic targets and promotion of innovative clinical trials in order to evaluate these new targets. She is an author and co-author of 278 publications in peer reviewed journals.

Is a medical graduate of the University of Glasgow. He completed his residency training in Glasgow and was then appointed Lecturer at the University of Southampton and in 1988 Senior Lecturer in Edinburgh University. His doctoral thesis involved investigating the development of Wilms` tumour and led to the discovery of WT1 and its role in kidney and genital tract biology. He has researched the genetics and pathology of renal tumours for 30 years including the discovery of VHL mutations in clear cell carcinoma, and the first descriptions of collecting duct carcinoma, succinate dehydrogenase deficient renal cancer and the pathology of fumarate hydratase mutations in HLRCC. He has published over 150 papers on the pathology of the kidney and renal cancer and his work is cited more than 250 times per annum. He is the Professor of Pathology in the University of Dundee since 2000.

Dr. Gown received his MD from the Albert Einstein College of Medicine of Yeshiva University, Bronx, NY in 1975, and then completed his Pathology Residency as well as Pathology Fellowship training at the University of Washington, Seattle, the latter under the aegis of Dr. Earl Benditt. Dr. Gown rose through the ranks to full Professor of Pathology and served as attending pathologist at the University of Washington Medical Center, where he developed and directed the immunohistochemistry (IHC) laboratory. In 1997, Dr. Gown left the University of Washington to found PhenoPath, which has grown to become an internationally renowned specialty pathology reference laboratory. Currently, Medical Director and Chief Pathologist at PhenoPath, Dr. Gown is a pathologist-scientist recognized as one of the world’s leading experts in the diagnostic and research applications of IHC. He has developed numerous clinically important monoclonal antibodies employed in IHC laboratories around the world (HMB-45, OSCAR, etc.). Dr. Gown is a member of the editorial boards of many of the major pathology journals. He is a Clinical Professor of Pathology at the University of British Columbia, Vancouver, BC, and an Affiliate Investigator in the Clinical Research Division of the Fred Hutchinson Cancer Research Center, Seattle, WA. Dr. Gown continues to be at the forefront of clinical investigative studies employing IHC and other modalities with over 300 peer-reviewed publications and as a frequent presenter at national and international conferences.

Senior Consultant and a Head of the Immunohistochemistry Section in the Department of Pathology, Stavanger University Hospital, Norway. His professional focus is on diagnostic pathology, particularly hematopathology, pathology of the breast and cytopathology. He has been actively involved in teaching immunohistochemistry since 2000 as co-organizer of national and international meetings and courses as well as invited lecturer. Since 2009 he is a member of the core group and assessor in NordiQC organization. He is a co-author of more than 40 publications in the field of pathology.

Senior Expert Pathologist and Senior Principal Scientist in Pathology and Tissue Analytics Department at Roche Innovation Center Munich (RICM). He graduated from Poznan School of Medical Sciences (2001) and was board certified in pathology (2008). Since his graduation, he served as a staff pathologist in the Pathology Department at Greater Poland Cancer Center in Poznan, Poland, where his main focus was breast and gynecologic pathology, cytopathology, immunohistochemistry and molecular pathology. At that time, in one of his role he coordinated tumor sample collection process in the collaborative international Tumor Cancer Genome Project (TCGA). Three years ago, he joined the Pathology Department at RICM. His current area of research activity encompasses an application of digital pathology to tumor tissue analysis in the context of early phase clinical trials. His focus is on characterization of tumor immune infiltrate with the use of multiplex immunohistochemistry and digital image analysis. He co-authored 23 peer reviewed publications and two patent applications.

Educated as biomedical scientist, has worked within immunohistochemistry for more than 20 years. Until November 2017 he was a project coordinator at Laboratory for immunohistochemistry/ R&D, Institute of Pathology, Aalborg Hospital, Denmark. He was also appointed from the very beginning as a scheme manager in NordiQC (Nordic Immunohistochemical Quality Control – initiated in 1998 and established as a professional organization in 2003). He was also an assessor and data analyst in all NordiQC modules (general, breast, companion diagnostic and HER-2 ISH). He has also been a regular lecturer and organizer of national and international immunohistochemical workshops, particularly in the field of protocol optimization and standardization. He is an author and co-author of more than 40 scientific publications and several book chapters based on immunohistochemical studies and he is member of the editorial board of several peer-reviewed international journals. Since November 2017 he is a global pathology specialist at Agilent Technologies.

Professor of pathology at the Department of Clinical Sciences, Division Oncology and Pathology, Lund University, Sweden is since 2016. Previously: Professor of pathology at the University of Toronto 2011-2015 and at Karolinska Institute 2003-2010. She is a co-author of approximately 200 original and review papers as well as chapters in several textbooks, editor of the textbook “Blood and Bone Marrow Pathology” and co-author of some chapters in the 2008 and 2016 editions of “WHO Classification of Haematopoietic Malignancies”.

Is an associate professor of pathology at the University of Uppsala, head of Laboratory Medicine Dalarna and head of the Department of Pathology and Clinical Cytology at the Central Hospital in Falun, Sweden. He is breast cancer expert of the Swedish Board of Welfare and regular course director of its breast pathology program. The last years he is also one of the faculty members in the breast pathology arm of the European School of Pathology, invited faculty member in European School of Radiology and one of the scientific directors in the European School of Oncology Certificate of Competence in Breast Cancer program. In addition to more than 80 journal articles and 20 book chapters, he published the book Practical Breast Pathology, an official teaching material of the European School of Pathology. He is also co-author of the Thieme Series on Art and Science of Mammography. With radiological – pathological correlation of breast diseases as the main field of interest, he is repeatedly invited lecturer at the European Congress of Radiology, European Congress of Pathology, and other international and national congresses, symposia, and teaching courses all over the world. He is a member of the Editorial Board of Virchows Archiv, Vojnosanitetski pregled (Belgrade), the Journal of OncoPathology, and the Journal of Solid Tumors, one of the editors of Case Reports in Pathology, member of the European Working Groups for Breast Cancer Screening Pathology and the past chair of the Working Group for Breast Pathology of the European Society of Pathology.

Professor of Clinical Pathology at Aalborg University, Senior Consultant and the Head of the Laboratory of Immunohistochemistry at the Institute of Pathology, Aalborg University Hospital, Denmark. His main research fields and expertise are immunohistochemistry and gastrointestinal, liver and brain pathology. He is author and co-author of more than 100 scientific papers and several book chapters in these fields as well as the text book Compendium of Applied Immunohistochemistry (Danish; English version scheduled for 2016). He is also a co-founder and scheme director of the Nordic Immunohistochemical Quality Control (NordiQC) with Aalborg Hospital as its domicile which is currently has more than 700 participating pathology laboratories from more than 40 countries. 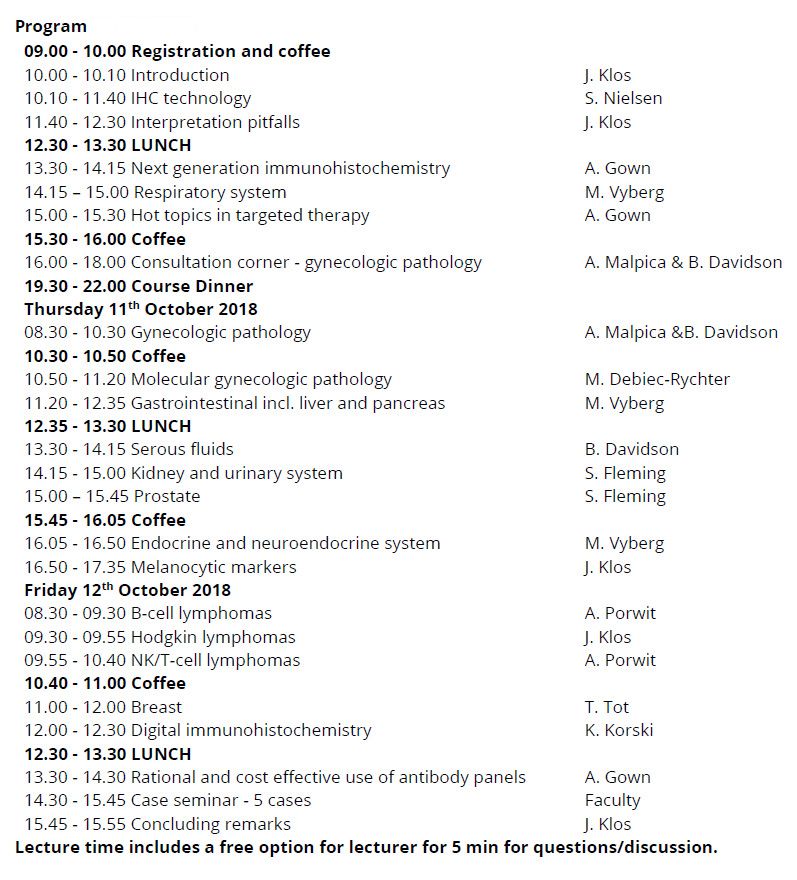